When I first bought my Instant Pot, I had a feeling that I would be able to make quite a few tasty keto friendly recipes with it. Even with that in mind going in, I was still completely blown away by the sheer amount of keto recipes available to make with an Instant Pot. Nearly everything you can think of can be made in one–even yogurt! Yes folks, keto yogurt! I was skeptical myself but as soon as you check out the recipe that I’m going to be sharing today, you’ll be a believer as well. The recipe will show you how to make the best Instant Pot keto yogurt, the easy way.

I’m not joking when I say that this just might be the easiest way I know of to make keto friendly yogurt. It only takes 10 quick minutes of prep work (followed by eight hours of cook time) to have the yogurt ready to go, and you’ll only be needing three simple ingredients: whole milk, heavy cream, and plain yogurt (just make sure that the yogurt you use as a starter contains live and active cultures). 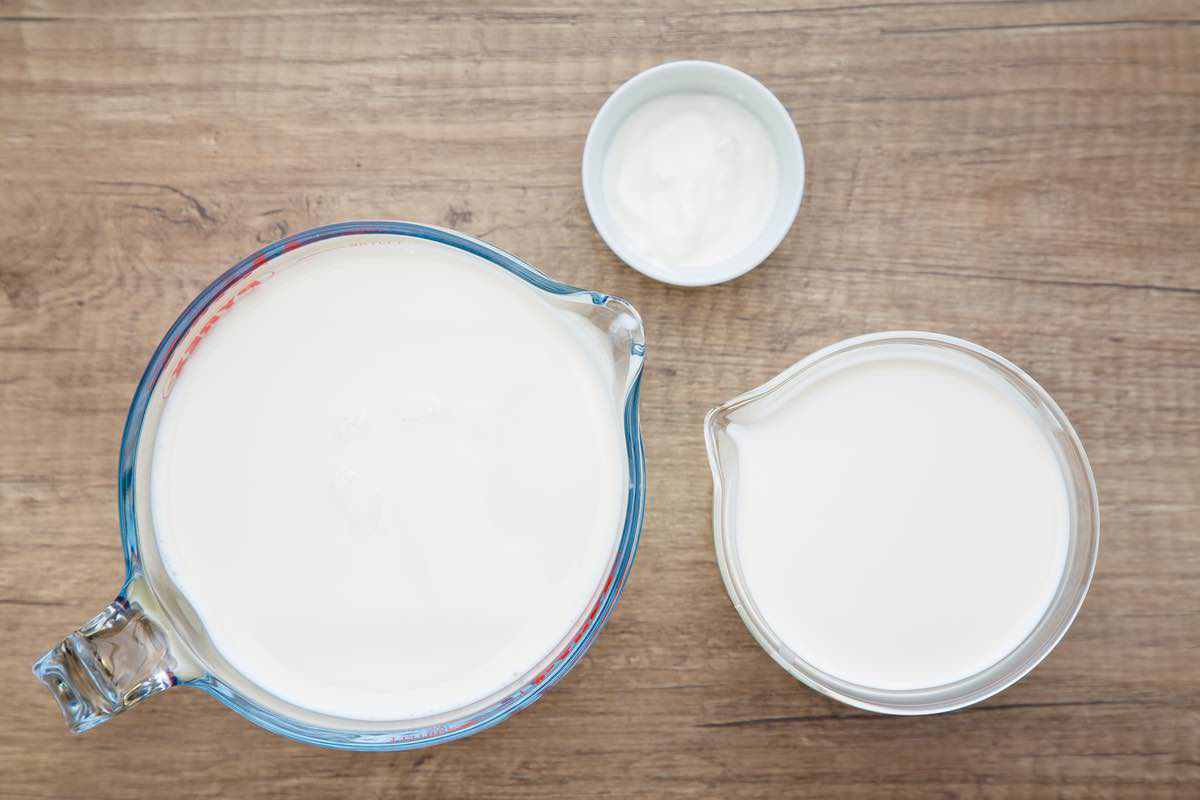 On top of the calories from fat, both the whole milk and heavy cream also add modest amounts of protein and essential vitamins and minerals, including vitamin A, calcium, and magnesium. In addition, using two tablespoons of yogurt provides you with even more protein and essential nutrients, on top of live and active bacteria cultures.

Getting the yogurt prepped and ready to go couldn’t be easier as well. Simply pour your four cups of whole milk and heavy cream into the Instant Pot and mix them until thoroughly combined. Press the ‘YOGURT’ button, wait about 10 seconds, and the Instant Pot should beep and the screen will then read ‘BOIL’. Once the boiling cycle is complete, the Pot will turn off automatically. 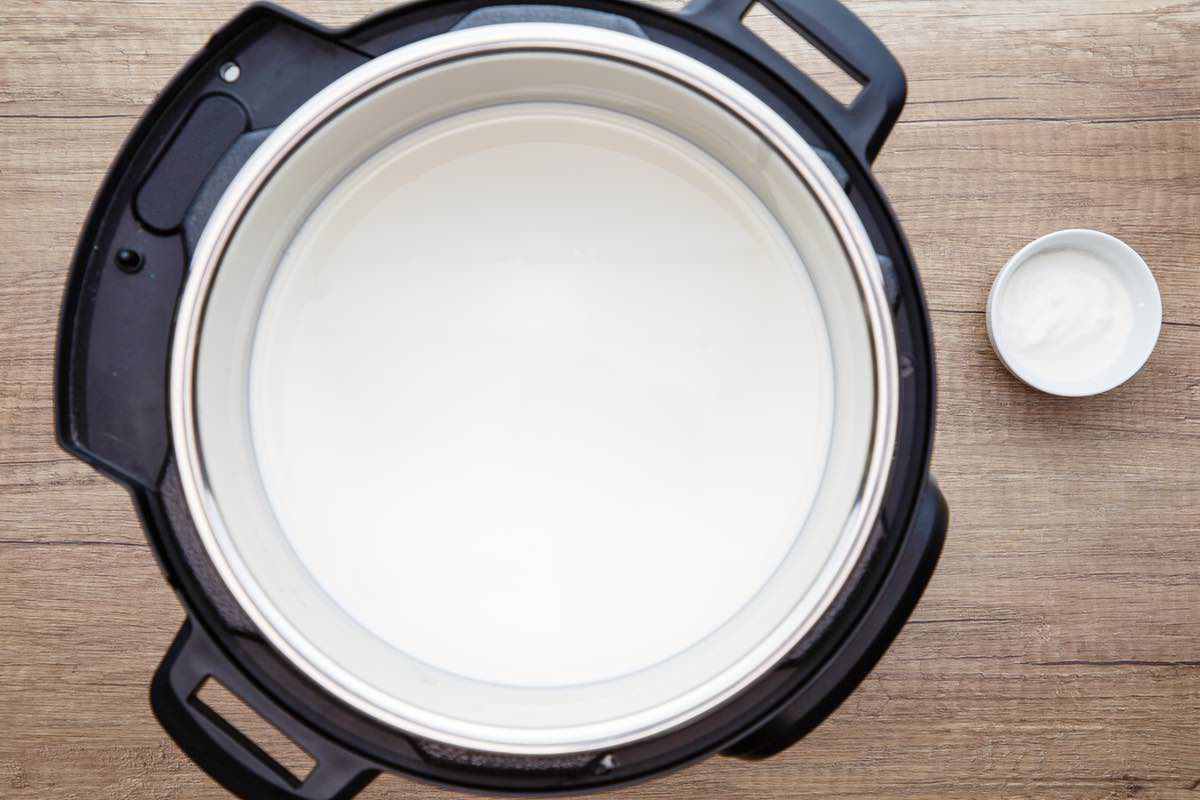 Remove the lid, stir the milk, and check the temperature because the mixture needs to reach a minimum of 180 degrees fahrenheit. You can then leave the milk to cool until it goes down to between 110 to 115 degrees fahrenheit and then place half of the milk mixture into a small bowl. 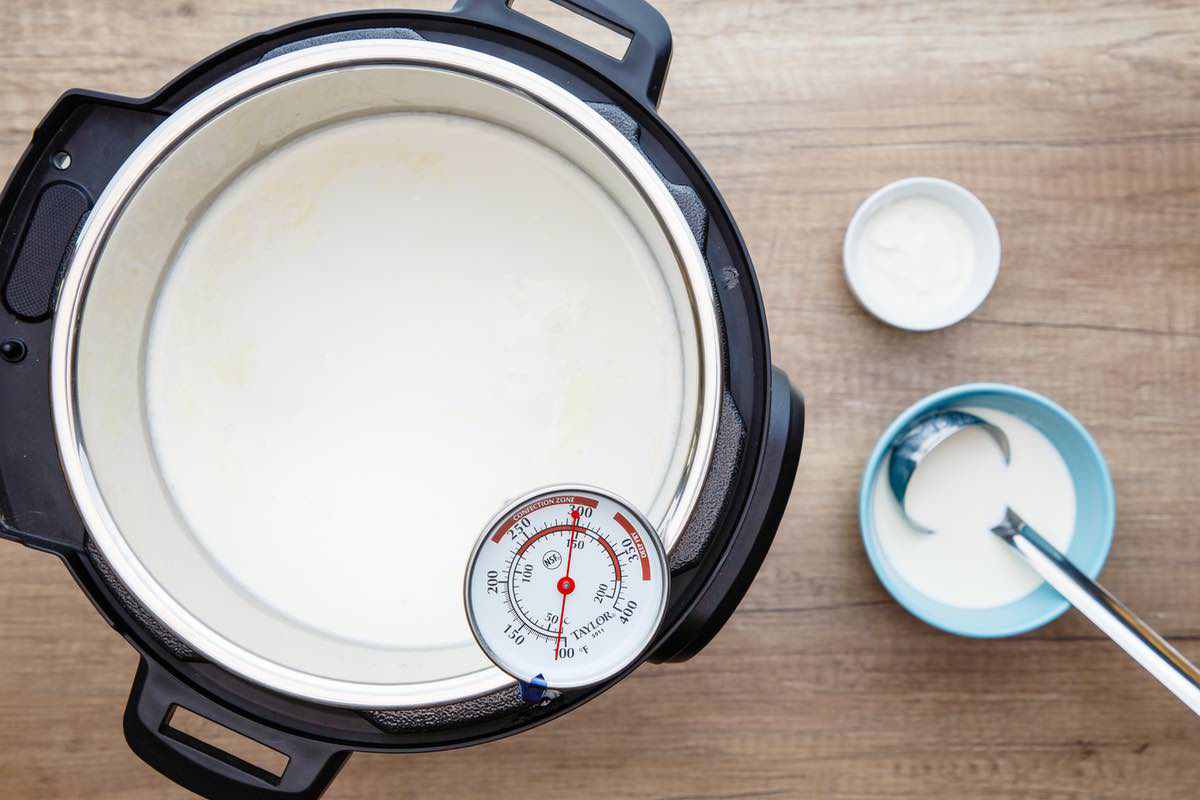 Next, add in the plain yogurt, mix to combine, and then stir the yogurt mixture back into the remaining milk mixture in the Instant Pot. Close the lid, set the Pot back to ‘YOGURT’, and leave it to cook for approximately eight hours. 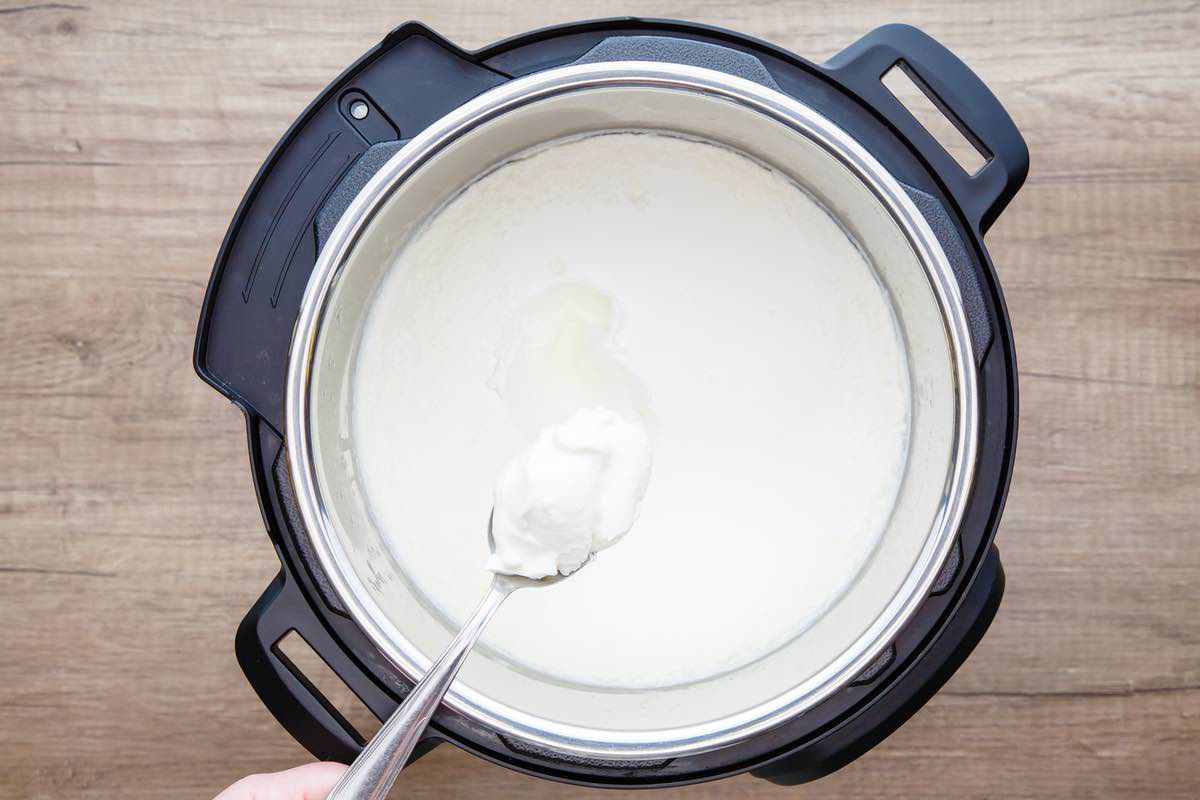 After the yogurt is done cooking, you can transfer it into airtight storage containers or jars and chill until cold, or about 4-5 hours.

While this is probably the easiest way that I know of to make delicious keto friendly yogurt, I also realize that not all of our readers own an Instant Pot. If you find yourself in that category, no worries! There are plenty of other ways to make keto yogurt from scratch. As a matter of fact, here are five great recipes (with no Instant Pot required) to do just that from some of my favorite keto blogs:

What are the Nutritional Benefits of Eating Yogurt While on a Keto Diet?

By making your own keto yogurt at home, you can reduce the carbohydrate content of each serving to around 2.5 to 5 grams of carbohydrate. Yogurt is a good source of protein and calcium. It also contains beneficial bacterial cultures, making it an accessible source of probiotics. (4) 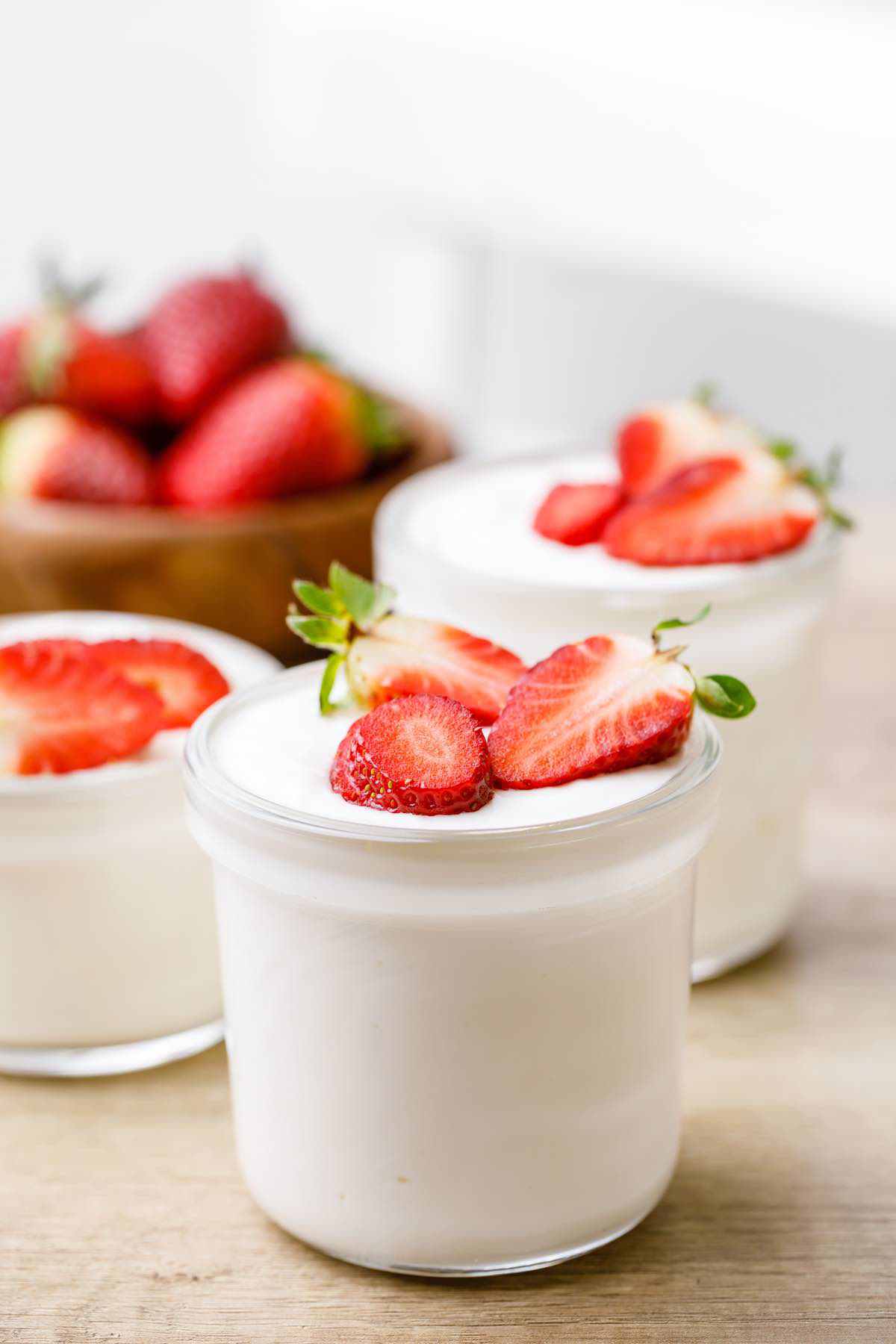 How Long Does This Homemade Yogurt Stay Good For?

You can expect this Instant Pot yogurt to last for up to five days if properly stored in an airtight container or jar in the fridge. After a while, the yogurt may appear to separate, resulting in a watery layer on top and a thicker layer on the bottom. This is normal for homemade yogurt and shouldn’t be taken as a sign that it has spoiled. Just stir it before serving and it should be good as new. 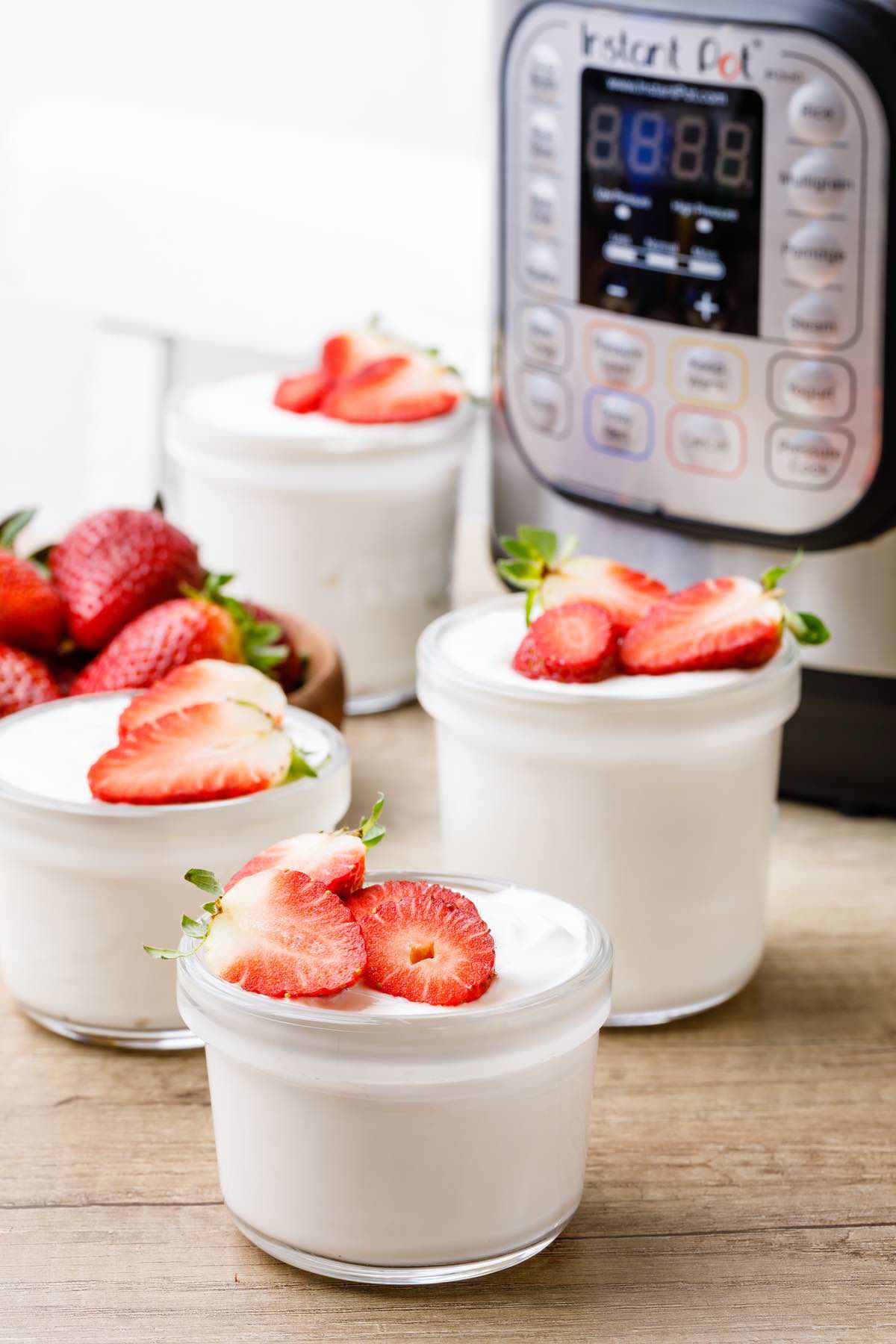 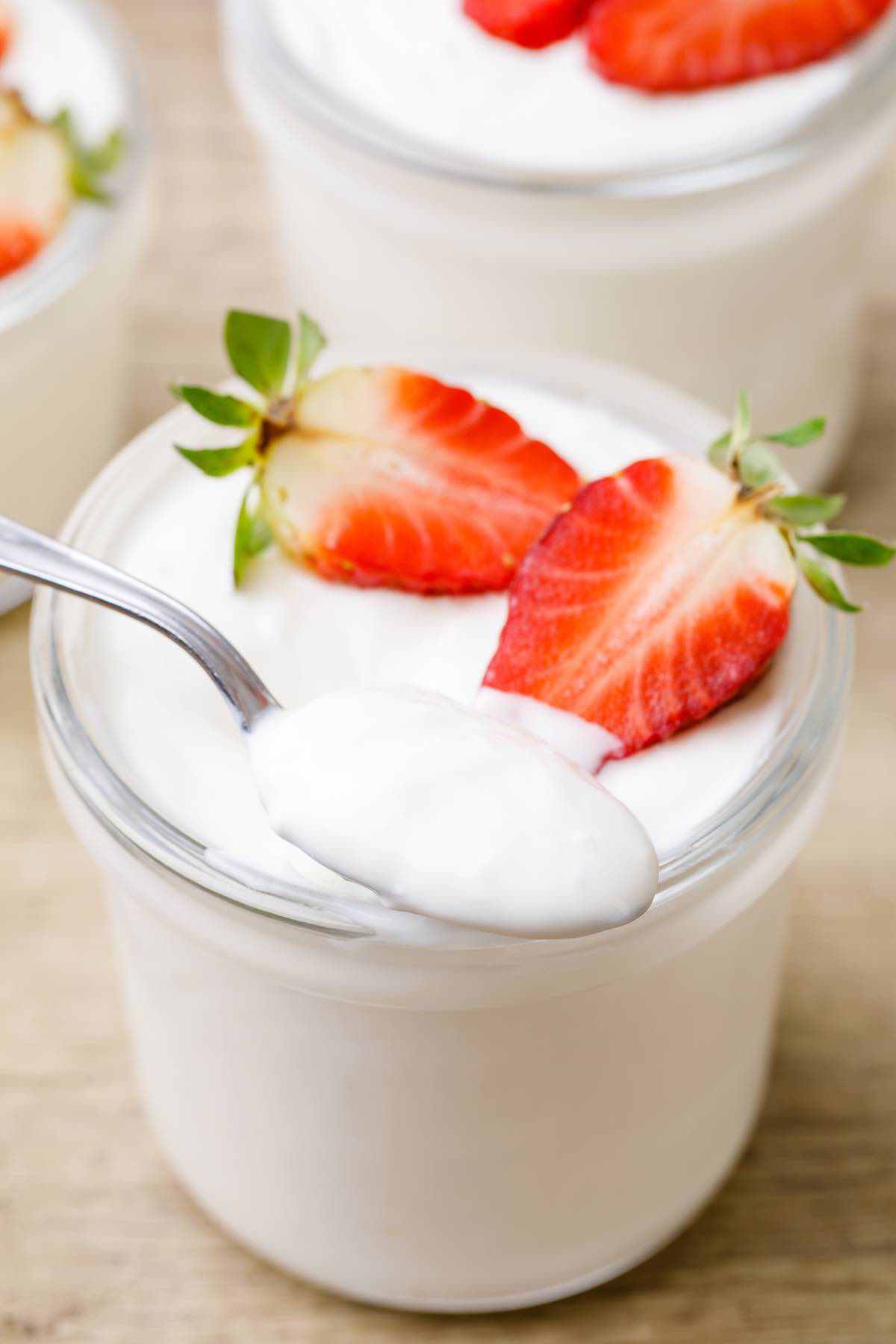 Can Homemade Yogurt Be Frozen?

While yes, it’s possible to freeze your homemade yogurt, it also happens to be one of those foods that loses a lot of its consistency when you thaw it out – which is to say I definitely would not recommend freezing it if you’re planning on just thawing it out and eating it normally after.

However, with that being said, there are still some instances where freezing your homemade yogurt could be appropriate. If you make a lot of recipes with yogurt as an ingredient, or even if you make a lot of smoothies, keeping a batch of frozen yogurt on hand can be an incredibly convenient option. 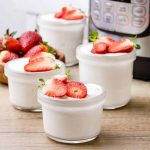 *Make sure the yogurt you use as starter contains live and active cultures.