When you’re preparing your meals on the keto diet, it doesn’t have to always mean sitting down to a plate full of meat and fatty foods. While it’s true that it’s essential to eat high amounts of fat with moderate amounts of protein in order to remain in ketosis, you don’t necessarily have to completely restrict carbs. Everybody is different, with some people choosing to keep their net carbs under 20g per day while others allow themselves as many as 100g per day. If you’re someone who is flexible with their carb content, then you’re going to absolutely love this out of this world keto vegetable soup. Even though it features an abundance of veggies, they’re low carb options that all work together perfectly to make one incredibly hearty soup.

It isn’t just the wonderful combination of veggies that makes this soup so good — it all starts with making the soup base and infusing it with some incredible flavors. After heating up a bit of olive oil in a pot, mix in some onion and garlic, which will give your soup an incredibly delightful aroma as it cooks and make it taste so addictive when served. Next, add the first batch of veggies — the celery, carrots, red and green bell peppers, and zucchini. This colorful combination of veggies adds an unbelievable amount of nutrients into the soup already, especially the bell peppers. They’re a great source of vitamin C and inflammation fighting capsaicin. (1)

After sauteeing the first few vegetables, you can then add in your choice of homemade vegetable or chicken broth, the diced tomatoes, bay leaf, dried oregano, red pepper flakes, and two cups of water. When I make this soup, I prefer to use my own chicken broth as I find that it enhances the overall flavor in a big way. The oregano and red pepper flakes both work to give the soup just the right amount of kick, while the tomatoes are another great low carb source of vitamin C — this soup is fantastic for giving your immune system a boost! 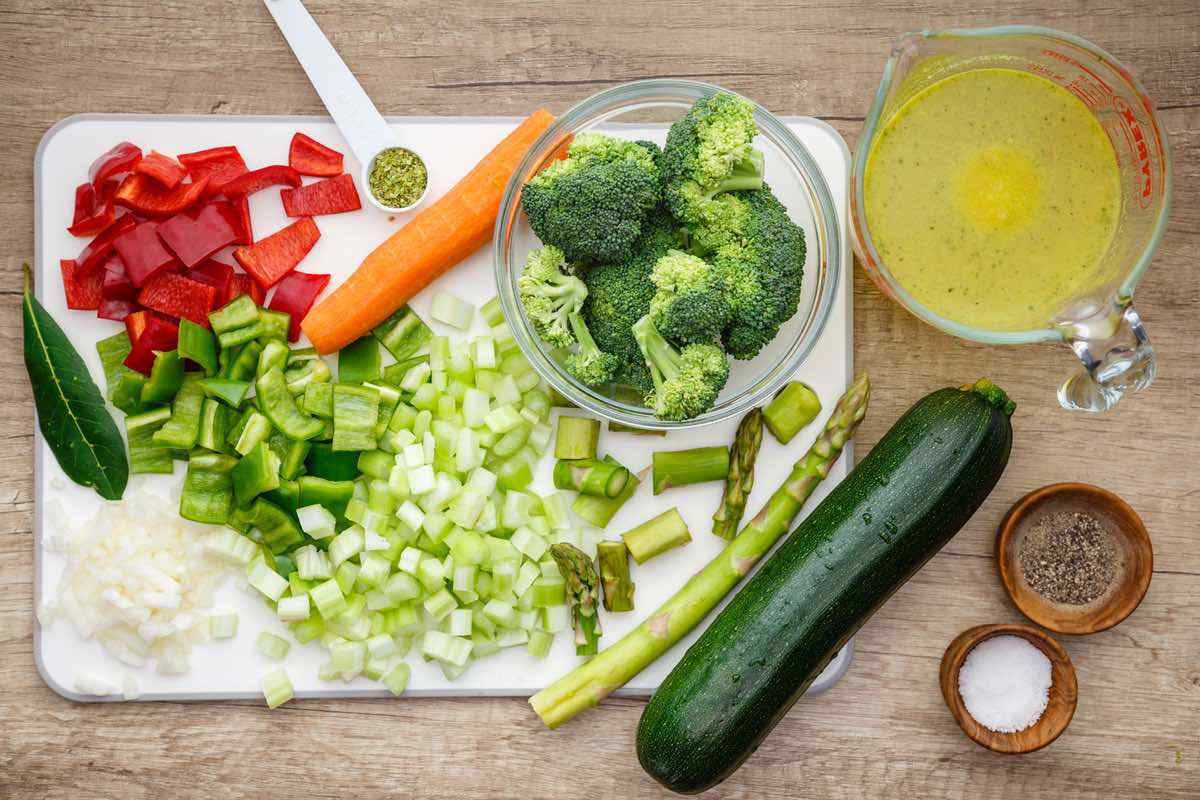 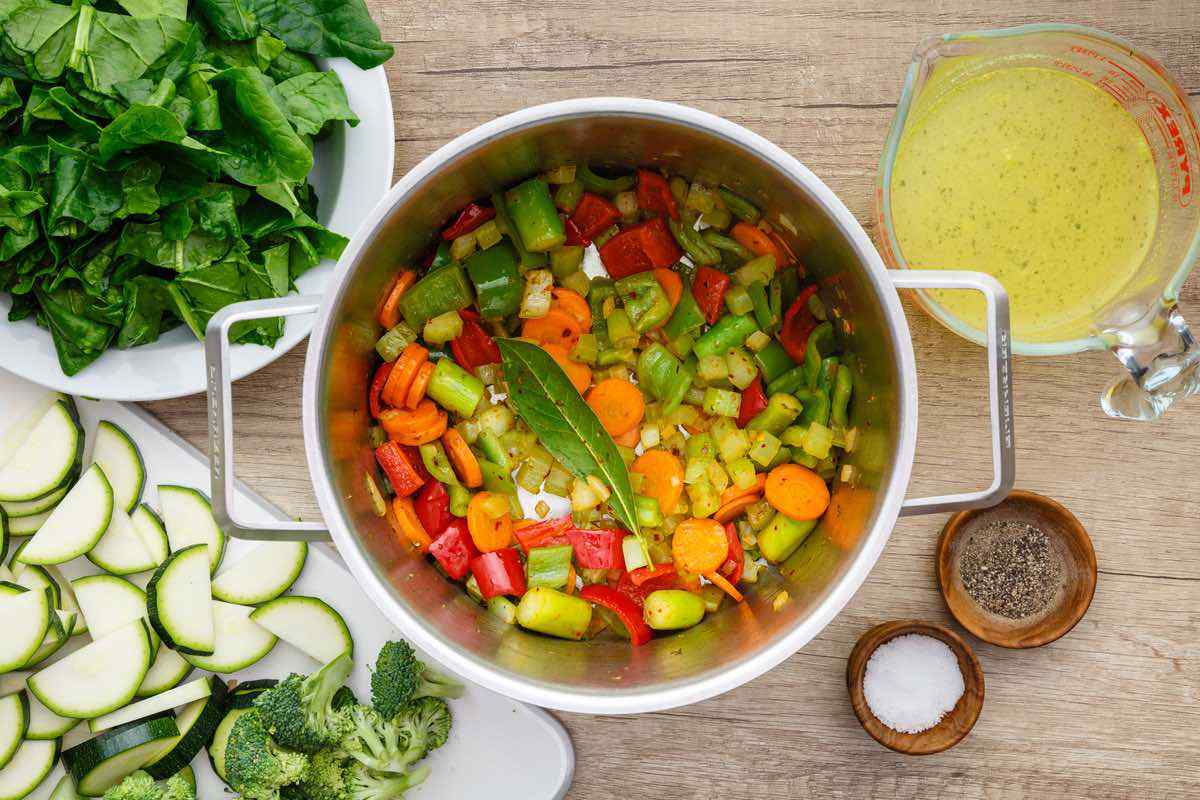 Allow the soup to simmer for about 20 minutes before you start to gradually add in your greens. Start by adding in the broccoli florets and asparagus, and then 10 minutes later add in the spinach. I don’t use asparagus nearly as often as I should, and I’m hoping to change that by starting to make this soup recipe more, along with including it with some of my other meals. It’s an incredibly healthy veggie that offers numerous health benefits, such as helping to prevent cancer and helping to lower high blood pressure. (2) Of course, broccoli and spinach are nutritional powerhouses in their own right, with each of them adding tons of antioxidants, vitamins, and minerals into the soup as well. After cooking the spinach for about five minutes, you can discard the bay leaf, stir in a bit of chopped parsley, and you’ll be all set. 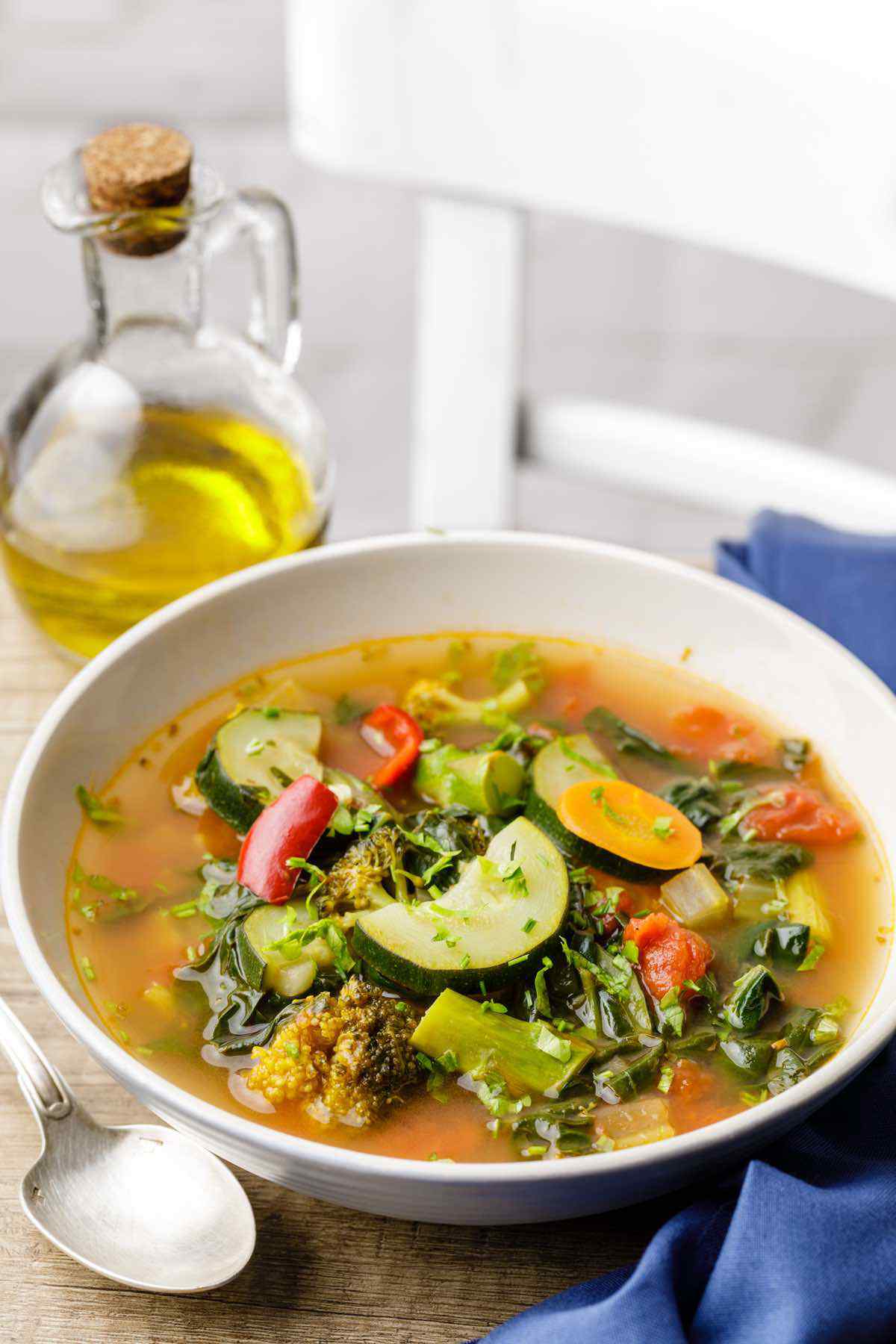 Despite the fact that this soup is made entirely with veggies, it’s an incredibly satisfying meal that you can enjoy on its own. While it’s true that the majority of your meals when eating keto should provide you with a ton of good fats with some protein to go with them, you also have to make sure that you’re getting plenty of fiber, vitamins, and minerals as well. This soup is a great way to balance things out. If you’re concerned about the total carb count, you can also feel free to play with the recipe a bit by removing certain ingredients if you’d like in order to bring the carb total down. 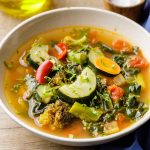 Out of This World Keto Vegetable Soup